With the wide variety available, shopping for a projector can be a bit confusing. To make the best choice, you have to consider factors such as throw ratio, contrast ratio, and the number of lumens on your prospective projector.

However, one of the most important things to consider when selecting a projector is the technology used in its manufacturing. Like TV screens, modern projectors are built using one of three technologies: DLP, LCD, and LED.

Let’s take a look at each of these projector types and figure out which one you should spend your money on.

DLP is one of the oldest technologies for building projectors. For video projection, the DLP projector uses a DLP chip that is made up of millions of microscopic mirrors, each of which is capable of independent adjustment, moving toward or away from the light source to create a dark or light pixel.

However, at this point, the produced images are in black and white. To make up for the lack of color a beam of light is fed to the chip. This beam passes through a spinning color wheel before it reaches the chip to add a color layer.

DLP projectors have a few advantages over the competition – they are effectively immune to color decay and they are not affected by the misalignments that can occur in LCD projectors.

Also, DLP projectors are filter-free and feature a sealed chip design, which means dust cannot settle on the chip and cause an image spot.

DLP projectors are not readily compatible with zoom lenses or lens shift functions, which means they are best suited to smaller environments.

A great DLP projector for the home is the PA503W from ViewSonic. 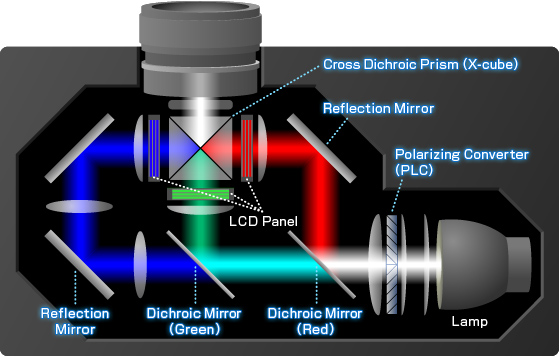 LCD is another frequently used technology in projectors. LCD projectors use the same liquid crystal display technology that can be found in electronic watches. An LCD projector creates images using a multistep process; first, a light source produces white light, which is then passed on to dichroic mirrors. The mirrors reflect the light adding colors, and then the beam of light is fed to an LCD panel. At that point, the LCD interprets the light and projects the corresponding image onto the screen.

LCD projectors offer a more stable and reliable alternative to traditional DLP projectors. However, with this improvement comes an increased maintenance cost, as pixels can burn out and dust particles can interfere with image quality – some of the risks of LCD projectors.

The LCDs make up for any price difference though as they are generally less expensive than their DLP counterparts. They also offer better support for setups in larger rooms and home cinemas, as they are compatible with zoom lenses and lens shifts.

If you are looking into the LCD projector market, we recommend you check out the Epson Home Projector 640. 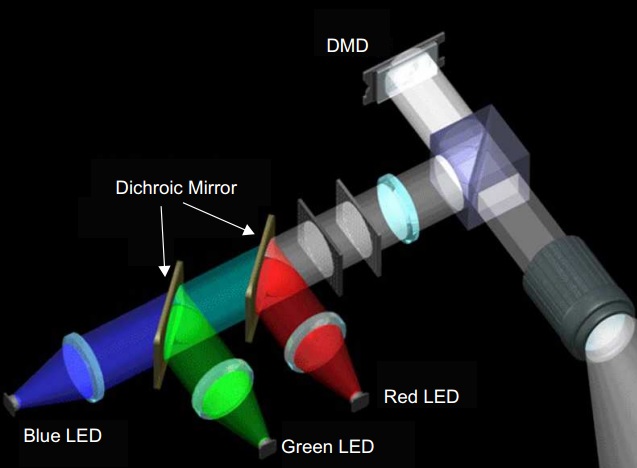 LED projectors are a different ball game as they are not defined by the technology used but by the kind of lighting used. LED projector can use either LCD or DLP technologies for their build. However, where they differ is that they replace the traditional projector lamps, rated at 1,000 hours to 5,000 hours, with more efficient and environmentally-friendly LED light source with ratings of up to 20,000 hours.

While LED projector can cost anywhere from dirt-cheap to very expensive, the do a great job in cutting down the maintenance cost as the light source is meant to last the entire life of the projector without ever needing to be replaced.

For home use, you can check out this portable projector by Crenova – the Crenova XPE460.

What is contrast ratio?

Do lumens matter for projectors?

How to Choose the Right Projector Mount

Projection Installation: The Dos and Don’ts

Top Benefits and Uses of Projector that May...

What is throw ratio and throw distance?